Hansa Luftbild has been relying on cameras from Vexcel Imaging in Graz for almost a decade.

With the UC-Xp, the Eagle M1 and M2, hundreds of thousands of square kilometers were “photographed” in Germany and abroad, and digital terrain models, (true) orthophotos or 3D city models were delivered to customers. 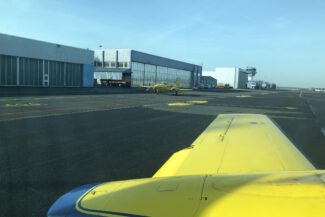 Vexcel Imaging succeeded in further developing the applied electronics. Thanks to new technology, the UltraCam Eagle M3 attains a radiometric resolution of more than 7,500 gray values by having a pixel size of 4.0 µm.
The pan-sharpening ratio of 1:3 and an SNR of >72 dB achieves amazing radiometric results. The so-called “Image Footprint” has also been further increased compared to the previous model.
The UltraCam Eagle Mark 3 generates a high-resolution 4-band image (RGBI) with a pixel size of 26,460 x 17,004.
The area captured on the ground depends on the flight altitude. With a ground resolution of 10 cm, an area of ​​2.6 km x 1.7 km can be mapped.
Together with the forward motion compensation (TDI), the gyro-stabilized mounts from SOMAG , the proven GNSS / INS systems from IGI  and their dual-hatch survey aircraft, Hansa Luftbild AG is able to literally fulfill every customer requirement. 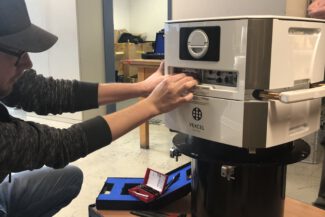